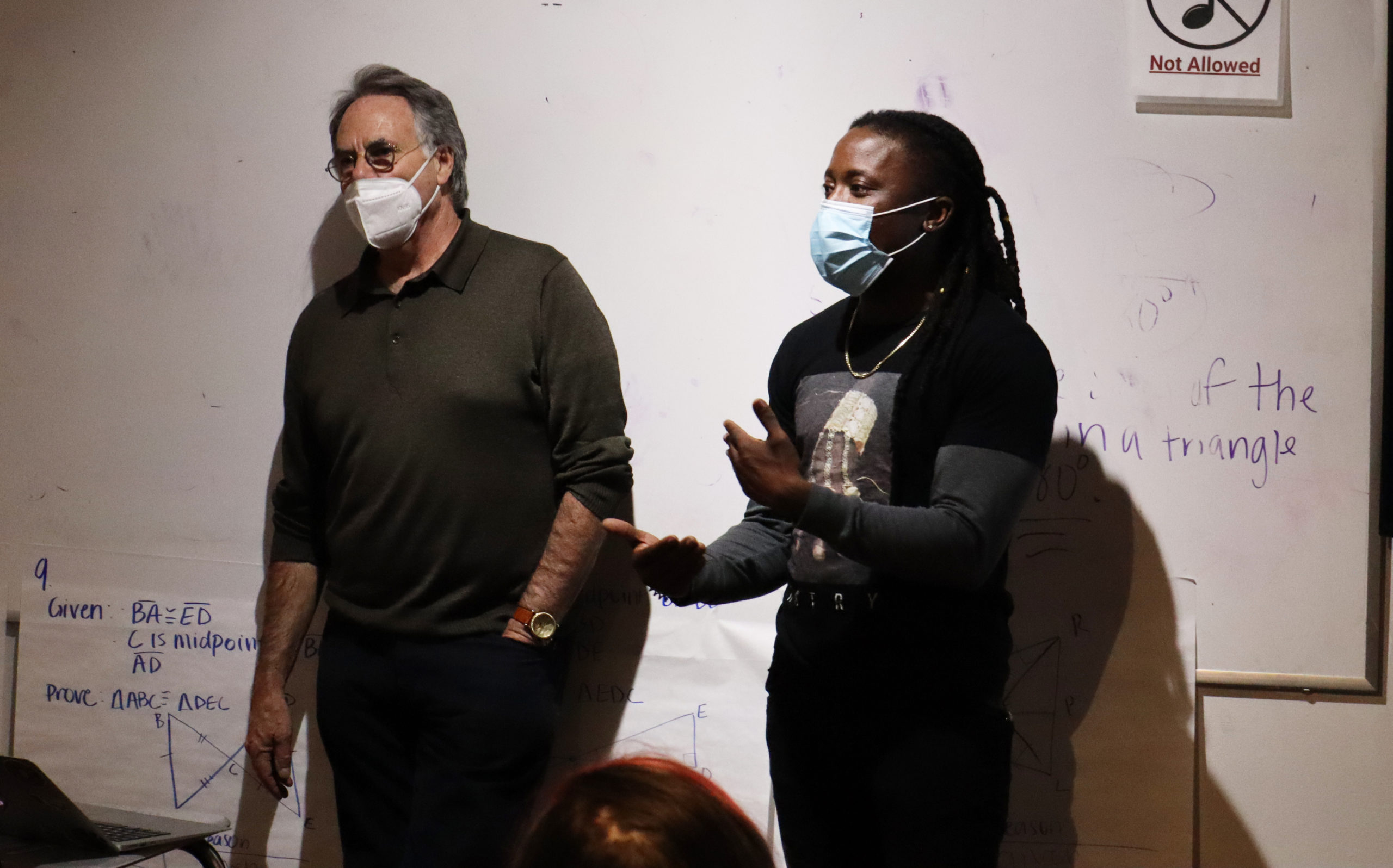 DREAM Charter High School 12th grader Shane Mohammed was making his way to class this past December when he spotted a man he recognized waiting outside the room. The pair had only previously met on Zoom, as DCHS classes moved to a hybrid model last year during the pandemic, but Shane knew his face immediately—it was Dr. Steven Hahn, a Pulitzer Prize-winning author and NYU professor who specializes in the international history of slavery, emancipation, and race. He was also the instructor for Shane’s next class.

“Both of their faces lit up when they saw each other,” said Matthew Beaton, Chair of the History Department at DCHS. “That’s our school in its most dynamic, creative way. We are building relationships and belonging, both for Dr. Hahn and for Shane.”

While some may think it’s more likely for Dr. Hahn to cross paths with his students in Washington Square Park, 2022 marks the second year he has been lecturing at DCHS, the result of a unique partnership formed with Brandon Taylor, Director of Curriculum and Instruction. After bonding over their shared love of history education last year, the pair began to ideate on how they could combine forces—specifically how they could develop a course that more tightly connected secondary education to the post-secondary environment.

The result has been two courses—the first, which began in January 2021, focused on America’s Reconstruction period, and the second, which culminated this past January, on the Great Migration from America’s southern states. Both Hahn and Taylor saw these courses as an opportunity to expose DCHS students to the college-level thinking they’d be doing after high school, but also as a chance to build on DREAM’s “critically conscious” curriculum, through the lens of history.

History in Context
Embarking on their first partnership in the early days of January 2021, Hahn and Taylor planned for their Reconstruction-focused course to rely heavily on the analysis of primary sources from the post-Civil War era. While those historic documents certainly played a role in Hahn’s lectures, what he and Taylor did not anticipate is that the course would be taught in the wake of the January 6 attack on the U.S. Capitol, making the issues of the Reconstruction Era—like unifying a country at odds and securing the rights of African-Americans—much more relevant to DREAM students.

“For anyone who ever doubted the political relevance of history, we’ve seen that more than ever [this past year],” said Hahn, who also teaches an NYU course called History in the Headlines. “A lot of things we see now have percolated to the surface from the beginning, if not before,” he added. “That’s one of the contributions a historical perspective can have.”

This need to teach history in the context of current events continued into the second iteration of Hahn and Taylor’s partnership: their course focused on the Great Migration, which kicked off this past December. While students were prompted to answer several “essential questions” around this time in history—Why do people migrate? How does migration happen? What happens when you move to a new place?—they were also tasked with thinking about how these events have led to present-day issues, and how the effects of the Great Migration continue to impact them today.

“We used history to connect and reevaluate why things are—why certain systems are in place, why is this group making more money, why can this group get a home easier than this group,” said Jerinsen Diaz, a DCHS 11th grader who took both the Reconstruction and Great Migration classes. “It’s one of the most important understandings we can get from history.”

“We want our students to engage in the process of making history so they can make history.”

“It’s really simple,” said Taylor. “Our job is to prepare students for the future. If there’s a danger to them, present or historical, they have a right, and we have a duty, to ensure they have an understanding of the ways this country has tried to hurt people who look like them. To not be transparent about that does them a disservice.”

This thinking not only applies to Hahn and Taylor’s courses, but the way DCHS presents history to its students across the board—that there is a power in acknowledging and challenging what has occurred in our collective past. DCHS teachers like Grant White, the instructor for 10th grade Global Studies, ensure that history feels relevant to students and connects to them personally. In turn, the students not only perform well on exams, but also demonstrate their ability to creatively think about the past. This “critically conscious” curriculum, said Department Chair Beaton, is what gives students a seat at the table in their own history-making, and allows them to “evaluate what we inherit from the past.”

“We want our students to engage in the process of making history so they can make history,” added DCHS teacher Magellan Pfluke.

Building for the Future
At DREAM, turning students into history makers also means creating an environment where they are set up for success, and given the confidence to know they can get there. A connection with Hahn, who is not only a college professor, but a Pultizer Prize-winning author, creates an opportunity for students to experience what college-level study entails, and shows them that door is open to them.

“Students’ confidence is boosted when they feel like they have something to say,” said Hahn, recounting an animated discussion the group had on the emergence of blues and jazz in the lower Mississippi Valley, and how that ultimately led to the music students listen to today. He added, “They were every bit as good as the college students I teach.”

After class, Hahn would field questions from students who were curious about a certain topic they discussed that day, or who wanted to apply that week’s lesson to something they were exploring in another course. Pfluke, who teaches DCHS’s AP Research course, watched with pride as one of his students approached Hahn to further discuss a connection between colonialism and slavery to modern-day African-American communities, the topic of her AP Research project.

“The beautiful moments were the times he could stay after and kids could ask questions,” said Taylor. “That, to me, felt the most like college. The kids were able to ask unique and dynamic questions that related to their experience and their history. They benefited from seeing they can engage with a Pulitzer Prize-winning professor one-on-one.”

What’s Next
While the Great Migration course is complete for this school year, Hahn and Taylor are still strategizing on what the next steps will be in their partnership—not only what the next topic of instruction could be, but where class could be held. Both are eager to bring students down to NYU—to get them on campus and into a college classroom, and hopefully break down some of the stigma and mystery that often surrounds higher education.

But until then, the pair are excited to continue their work of engaging students, and giving them the gift of history to help in their own self-exploration and their understanding of the world around them.

“It also helps us to not have history repeat itself,” said Jahira, an 11th grader who took both the Reconstruction and Great Migration courses. “So we can move forward and do better.” 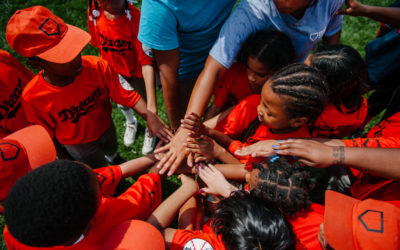 Looking Forward to a DREAM Summer

Summer has always been core to DREAM’s foundation. In the organization’s earliest years as Harlem RBI, it was clear that pairing baseball and... 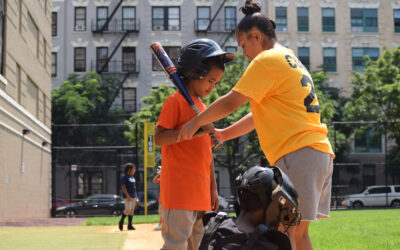 A DREAM Summer: Making the Most of Our Model

DREAM was born in the summer. On a baseball diamond under a high sun, while kids laughed, played, and cheered each other on as they learned what it... 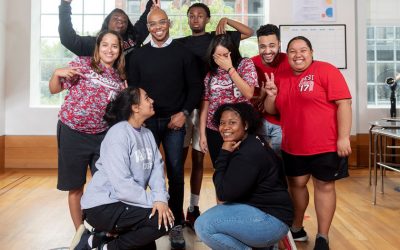 When the members of DREAM Charter High School’s 12th grade class throw their caps in the air on June 23, the moment will not only be monumental for...