Meet Bryan: A college acceptance that made history

My name is Jared Francis, and I’m the founding principal of DREAM Charter High School in East Harlem. This year, I’ve had the unique honor of launching our high school’s first-ever 12th grade class, and I want to share with you the story of one of our seniors here at DCHS, Bryan Placido.

Bryan and I have a lot in common. One of the things I first noticed about Bryan is that, like me, he has worked to overcome a speech impediment. I’ve watched Bryan confront that challenge to become one of our strongest Student Ambassadors each recruitment season. And of course, most recently, we are bound together by what we’ve all shared this year at DCHS: the joy of making history with DREAM’s founding seniors, many of whom have been with us since freshman year or even longer, but also the grief—and determination—as it became clear that the Class of 2020 would have a senior year like no other.

Remote learning was really tough for Bryan. He missed his peers, his extracurriculars, and “regular” school, and his GPA suffered at first. But with the support of the DREAM community—from socially distanced dog walks with DREAM social worker Judi to round-the-clock advocacy and one-to-one support from his college counselor Carlos—Bryan is now the recipient of a full scholarship to Skidmore College. Below is a video clip of the moment that he finds out—a moment that represents the very first of many college acceptances to come for DREAM students.

For Bryan, whose older brother had to leave college for financial reasons, a full ride to Skidmore means a lot. But I don’t share his story with you because he’s in any way the exception. At DREAM, every child, from pre-k to pre-college, has a fair shot at achieving their vision of success. As educators, we help them push past obstacles and inequity – because the potential, the drive, and the excellence already exists inside each and every one of our students.

We all know the stakes of DREAM’s work, but often that impact manifests far in the future, out of our sights. In Bryan’s story, we get the gift of seeing how much what we do matters and what a difference our work can make. In a year like 2020, that means more than ever. 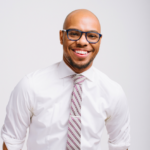 Jared R. Francis, DREAM Charter High School principal, has focused the work of DREAM Charter High School on developing highly-skilled and critically conscious young people. Jared began his career working in after-school programs and later co-founded a secondary school in Brooklyn, where he served as a teacher and leader. Prior to joining the team at DREAM, Jared worked as the Assistant Principal at a turnaround charter school in Brooklyn. Jared holds a Master’s in Educational Leadership from New York University. He is a graduate of the State University of New York, Empire State College, where he studied American Politics. He was raised in East Harlem and is a product of New York City public schools. In the early evening of June 23, DREAM Charter High School’s 2022 12th grade class officially moved the tassels on their graduation caps and were...